Information Scientist with an interest in Recommender Systems, User Modelling, and Personalization working as Senior Lecturer at University of Gothenburg 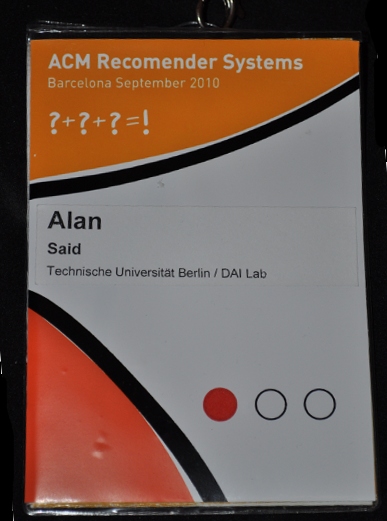 If you're reading this, you might have read my previous posts about RecSys2010, and in that case you might know that I had axtremely high expectations for this year's RecSys conference, and I was not dissappointed.

The conference program had been extended from last year and now included two days of workshops: the first day of the conference, and the last.

The workshop taking place on the first day were CARS (the workshop on context-aware recommender systems), RSWEB (recommender systems and the social web), HetRec (the workshop on informaiton heterogeneity and fusion in recommender systems) and WOMRAD (the workshop on music recommendation and discovery), additionally this was also the day of the doctoral symposium (which I attended). This meant that for the second year in a row I could not attend the CARS workshop (I had a paper at RSWEB 2009). Luckily though, the doctoral symposium started an hour later than the workshops which presented me with the opportunity to attend the beginning of the CARS keynote which was held by Bamshad Mobasher, the topic of this was Contextual User Modeling for Recommendation and gave broad overview of the benefits of context-awareness as well as the problems involved in its usage.

The doctoral symposium was chaired by Pearl Pu and John Riedl (who could not attend and thus Joe Konstan took his place). There were a total of six presentations at the symposium, each covering a different topic.


The day ended with an all but calm harbour cruise organized by the conference. The food and drinks were great, however those who got splashed in the waves were most likely not thinking about the catering.

The first official day of the conference started with tutorials. The three speakers were Guy Shani - Evaluating Recommender Systems, Joe Konstan - HCI for Recommender Systems: An Introduction and Ricardo Baeza-Yates - Query Intent Prediction and Recommendation all presented important aspects of recommendation. The most appreciated one, having spoken to a number of listeners afterwards, seemed to have been Joe Konstan's, which presented some of the issues Movielens were dealing with, as well as aspects one should think of when designing systems which will be used by users. This was, as stated by Konstan, a tutorial for those without a background in HCI. Having a background in HCI I still found this tutorial the most interesting one.

The tutorials were followed by an industry panel, where Google (this time represented by YouTube) would walk around the question ad infinitum without actually answering it, again. Even so, it was quite interesting. The day ended with a reception were short papers were presented as posters.

The following conference days were filled with paper presentations, and as these have been covered by others I will not go into detail. Perhaps just mentioning one paper which I found particularly interesting: Multiverse Recommendation for Context-Aware Collaborative filtering [ACM] [blog] which presented a model for latent context-modeling through a hybrid-SVD approach where the ratings of items by users were extended by another contextual dimension. For instance if a user rated a movie at a certain place, or at a certain age, this was then taken into consideration when factorizing the tensor in order to, in the end, present recommendations. Having made a similar approach, on folksonomies and not movies, this was really interesting and presented a view of the user-item-relation I had not considered (as age and place are strictly user-related features, appending those features onto the user-item relation is something, I would argue, not intuitive).

The last day of the conference, actually after the conference had had its closing session, was the the second workshop day. This had apparently been missed by a number of people I talked to, they had been unaware of the last workshops. However, this day there were another four, wereof I had the opportunity to organize one, CAMRa (which I've written about earlier). Sadly, three out of the ten presenters we had planned for could not attend the conference due to different reasons. This did however give us some room for an open discussion with the (quite large) audience. During the day we presented the winners of the different tracks, the overall winners had already been announced during the banquet two days earlier.  A list of all winners can be found here, sadly one of the winners (from the social track) was also one of the participants that could not attend the conference.

During the discussion after the presentations, Moviepilot announced their plans on releasing their dataset, the details on how this will be done had still not been worked out at the time of the announcement, this did however turn to the buzzing topic of the rest of the day.

All in all, RecSys 2010 was a great success, and I am now looking forward to the next RecSys conference with great anticipation. RecSys 2011 it will be held in Chicago and co-chaired by Robin Burke and Bamshad Mobasher.

You May Also Enjoy

More than a decade of RecSys

A toolkit for recsys evaluation

Workshop on Reproducibility and Replication in Recommender Systems Evaluation